What follows is an article focused on the nature of the liberal arts as it relates to the creation of knowledge. It will be published in the DC Magazine in the next few months.

Meet Knuckles Muldoon. Knuckles has, yes, knuckles, but he is less a fighter than a lover at first glance. He is dressed to the teeth. He sports yellow boots and a yellow vest. His pants and coat are shamrock green and complemented with a green bowler hat (with a stripe of yellow for accent). His cheeks are rosy; his gut protrudes; his knuckles are clenched around the lapel of his jacket; an Abe Lincoln beard trims his chin and jowls. If it were not for his prominent frown, I can imagine many a merry lass’s head being turned by his fine figure. However, that frown, that grimace almost looks constipated, as a student once noted, which is ironic to say the least because Knuckles Muldoon, is empty. Knuckles Muldoon is, you understand, a whiskey decanter. 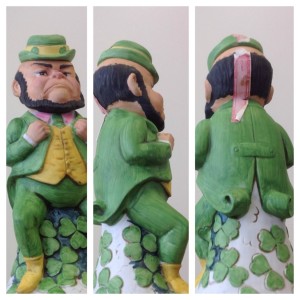 Knuckles, strangely enough, is also a centerpiece to my discussions about the liberal arts here at the college. Stay with me now.

Knuckles is an Irish stereotype—to put it bluntly, he is a leprechaun. The Irish were persecuted for centuries in Ireland (as it was colonized by England), and, later, in the United States as not quite “white.” This is difficult to imagine today, but, as Noel Ignatiev’s well-known book How the Irish Became White argues, whiteness is a social construction and for much of recent history the Irish were excluded from the benefits and privileges of whiteness.

Before their assimilation to whiteness, the Irish were, on the one hand, depicted as bestial and savage. On the other hand, they became the stuff of entertainment as English culture would compel the Irish to figuratively or literally dance a jig. You know, do that Irish shtick.

Stereotypes, even the entertaining ones, are not harmless of course. They are, from the disciplinary standpoint of English or cultural studies, products of power. “Bestial” representations of the Irish, as seen in the British magazine Punch, among others, helped rationalize British power over the Irish—for if the Irish were in fact animals, they certainly could not rule themselves. For a home-grown example of this same process, watch Marlon Riggs’ fine, if disturbing, documentary Ethnic Notions, which depicts black stereotypes before and after the Civil War and explains how stereotypes of African-Americans dynamically changed to justify the work of power.

What is a stereotype? More importantly, how does this relate to the liberal arts? A stereotype is formed when an immediate connection is made between a person and an idea. Knuckles Muldoon with his rosy face embodies a certain—British or American—culture’s low expectation of the Irish. Knuckles, again, is a decanter, a container intended to carry a pint of whiskey. However, like the drunken Irish stereotype, Knuckles is hollow at his core.

It works like this in the classroom: I have students sit in a circle and I place Knuckles Muldoon at the center. I ask a student what he or she sees. Tom immediately replies, “a leprechaun.” I ask Dick if he sees something different, and so on. What each student sees is dependent on his or her own position. Tom, face to face with Knuckles, knows with certainty what he sees; Dick, glancing at Knuckles from the side, is less certain; and Harriet, seated behind Knuckles, is quite flummoxed.

All that is demonstrated thus far in this small pedagogical experiment is that our knowledge of reality is to a great deal limited by our perspective. A 42-year-old English professor looking at Knuckles will immediately think about how to use Knuckles to discuss the constructed nature of reality and stereotypes. A 15-year-old chancing on Knuckles Muldoon at a West Virginia garage sale will be amused by the figure, and, convinced by the token price, take him home for the next three decades of his life. Value and meaning are dependent to a degree on who the viewer is at a particular moment.

The liberal arts should include an awareness of how personal identity influences truth creation; however, the essence of the liberal arts is its plurality. When Tom tells Dick what he sees, when Dick tells Harriet what he sees, and so on, something else happens. All of a sudden all truth positions become relativized. There is a gap, a hesitation, in our process of truth creation.

Think of it this way: If you are Tom, and Dick tells you a story about a real event, you believe it. You are immediately certain about the truth of the situation as represented by Dick. What then happens if Harriet tells you a slightly different story about the same real event? Both stories now are believed and yet not believed. You hold them at arm’s length, weighing the truth of each in your mind, and this is the essence of the liberal arts.

Traditionally, when one speaks of the liberal arts, one includes such disciplines as literature, mathematics, the sciences; my view is less concerned with what subjects one studies, though that too is important, and more interested in how multiple viewpoints of the same object lead to this hesitation, not to paralysis, but to a slowing down of the truth process that is intimately bound up with ethics and the creation of a critical citizenry—the larger goal, after all, of the liberal arts.

My emphasis, to say the least, is not representative of most takes on the liberal arts. In a recent panel (February 2015) at Defiance College concerned with the nature of the liberal arts, to a large extent, the presentations by Professors Lisa Crumit-Hancock, Jeff Lauer, and Mary Catherine Harper, emphasized integration—the integration of mind and body, of the “divided mind”, and so on. In general I do not disagree with their viewpoints.

Consider for a moment gender stereotypes. English, as a field, tends to emphasize how narrative (understood broadly) constructs our meaningful relationships with reality and people. However, and this pains me deeply to admit, biology—as psychology professor Deb Dalke repeatedly reminds me—certainly has an influence on human behavior. The amount of testosterone racing through me at this very moment influences my gender. An integrated understanding of gender then would simultaneously recognize both nature and nurture, both the constructed and the innate nature of gender. The ability to juggle different viewpoints on a subject only to then integrate them is essential to the liberal arts and is surely what separates a liberal arts college from a trade school or a professional program.

Regardless, I insist however on retaining the gap, however small between different viewpoints.

Even while we integrate various positions together, the very process of airing ideas, holding them at arm’s length, comparing one to the other, inserts a space or margin of doubt into the integration that follows. This gap guards against fixity, ego, and that too easy closure that would allow an issue to be forgotten, casually set aside, as we move on.  If life is a journey, so is the truth process, and it must never stop.

I use Knuckles Muldoon to teach the liberal arts because he embodies a major issue, stereotypes, which is the engine behind much oppression. But Knuckles could embody any issue—world hunger, ebola, Occupy Wall Street—whose truth will be complicated by the perspective(s) of the viewer(s).

In a world of stereotypes, which, despite their emptiness, justify enormous amounts of violence; in a world in which wars are perpetual, and peace is transient, the lesson of Knuckles Muldoon—and the lesson of the liberal arts—becomes the cardinal lesson of our time: Listen to multiple perspectives, slow down, hesitate, and only then take action.